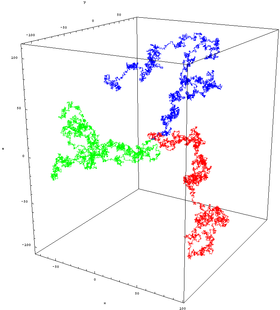 This article goes into the basics of random walks on groups, and may skip or skim over prerequisite information. It is advisable to look up the articles on those topics before reading this.

Recall the definition of a group:

is a set closed under a binary operation satisfying

Subsets of groups that are also groups are called subgroups. For example, the set containing just the identity is the trivial subgroup, and a group is a subgroup of itself. Because subgroups are closed under their operation (as a subset of the group), we can split a group into cosets of a subgroup

, where each coset is

. Some of these cosets can overlap, though cosets are either mutually exclusive or are equivalent.

, prove that for any subgroup

are either the same set or contain no overlap.

Hint: What happens when we have

is actually called a left coset, and

would be a right coset. However, we usually talk about cosets of normal subgroups, which is when

are the same set. Note that this is equivalent to

being closed under conjugation (i.e subgroup

is normal if and only if

). It turns out that the set of cosets of a normal subgroup forms another group called the quotient group. One familiar quotient group is the remainders when dividing by

, which is a quotient group of the integers under addition.

Now that we’ve introduced groups, let’s talk about probability. When we usually think of probability, we think of events such as rolling a die or flipping a coin, and associate a value from

to that event. We can do the same but with groups, by using a function to associate a probability to each element of a group.

Definition 1.3: A probability distribution is a function

Essentially, the probability of picking element

. Below are several examples of probability distributions:

Flipping a fair coin can be represented as a distribution on

, or the remainders modulo

, where both probabilities are

. Rolling a fair die is a distribution on

, we say the distribution is uniform. Here,

is the order of

, and is the number of elements in the group.

, the integers under addition, with distribution

otherwise. In these non-uniform distributions, the elements that have probability zero are not important as they can never occur, so in many cases we want to work with the support of

, or the set of elements that have positive probability.

Definition 1.4: A random walk on a group

along with its associated probability distribution

is a sequence of elements starting from

such that the probability of

is positive for all

, meaning we can always get from any element to any other element, and a random walk is called aperiodic if for time

is fixed the probability of reaching an element is positive, meaning we can reach any state at any time given that the time is large enough. When both conditions are satisfied, we say that the walk is ergodic. Below are a few examples of random walks on groups:

Example 1.5: A random walk on the plane moving one unit in any direction parallel to the axes can be represented as a random walk on

Example 1.6: Shuffling cards is a random walk on

, the symmetric group. The probability distribution depends on what method is used to shuffle the cards.

One easy albeit inefficient way to shuffle a deck is by transposition, or switching the positions of two not necessarily distinct cards in the deck. This can be represented by the distribution

In standard probability, as long as we repeat for a large amount of times, our sequence will “converge” to some value. For example, a fair coin will always converge to a 50-50 distribution after a large number of tries no matter what the first few flips are.

after a long time

, which is quite hard in practice. Thus we define a convolution recursively by

is the sum over all instances of first rolling element

, which results in being at element

after two steps. The recursion then follows inductively.

The convolutions will converge to a unique stationary distribution when the random walk is ergodic (and in fact, will be uniform). However, ergodicity is also somewhat hard to establish.

and its probability distribution

, the random walk on

will be ergodic if and only if the support of

Proof:
Here, proper subgroup means it is not equivalent to

. Let the support of

. First suppose that the random walk is irreducible, so starting from

we can arrive at any element

. Because we can only multiply by elements in

, in order to reach any element the support must contain a generating set for

can be contained by a proper subgroup of

, then due to closure the set generated by

, must be contained within the subgroup. This is a contradiction, so

cannot be contained within a proper subgroup.

cannot be contained within a proper subgroup

. The set generated by

must be closed and contain inverses, so it must be a subgroup. However, it cannot be a proper subgroup, so then it must be

. Then any element can be written as a product of elements in

, so we can always get from element

by multiplying the corresponding representation for

is contained by some coset of a proper normal subgroup

steps can be expressed as multiplying by

in order. Thus we arrive at their product

because of association and normality. By carrying out this process multiple times, we see that the product becomes

. Closure tells us that

, and therefore the product lies in the coset

is a proper normal subgroup, we can take an element of the nonempty set

, and observe that we cannot arrive at this element in

was chosen arbitrarily, the random walk cannot be aperiodic.

Conversely, suppose the random walk is not aperiodic. Since the walk is irreducible, this means that we will arrive at any element periodically with interval

. We can express this formally as the common factor

We prove that these sets do not overlap with each other. First note that if

is the product of

and thus lies in

. Now suppose we have overlap between two sets, i.e.

By the definition of

this product must lie in

have no common elements unless

are equivalent. Lastly, note that

is a normal subgroup of

is a subset of

, it is contained in a coset of

Besides wanting to know what a distribution will converge, we also want to find out how many steps we need to get a close approximation of the stationary distribution.

Definition 1.9: Total variation measures how much a distribution deviates from its stationary distribution

after a certain amount of steps, and is calculated by

When the total variation is small, commonly measured with

or other small number, we say that the random walk is sufficiently mixed. The mixing time, is the minimum time

for which a random walk is mixed.

It is always nice to find the mixing time or find better bounds on it in a random walk in order to have more efficient processes. For example, Persi Diaconis and Mehrdad Shahshahani proved in 1980 that it takes

. In comparison, the popular riffle shuffle takes about

shuffles to ensure the same “randomness.” Many real-life events can be expressed as random walks on groups, and I encourage you to explore them yourself and find their stationary distributions/mixing times!

We are Primeri, a site providing free competition and academia math resources based on our experience for elementary, middle, and high schoolers.